How does it work?

Free radicals are unstable, highly reactive molecules. In our cells, they result naturally from cell metabolism and oxygen consumption and are also caused by exposure to toxins, stress, and other lifestyle factors. If the body cannot neutralize their negative impact adequately, free radicals cause damage at the cellular level. Free radicals, which are also know as Reactive Oxygen Species (ROS), can react in the body in three ways: 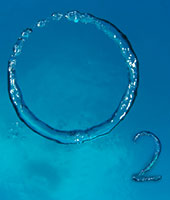 The Active Air 5 device at Grail Springs is designed to initiate oxidative response. While most of the free radicals are damaging, the final phase of certain free radicals acts as a signal, also known as redox signaling, for oxidative response. The excitation units inside the device produces the same emissions as the final phase of the radicals, called ROS-specific signals. This mimics a biological process that triggers the body’s response to oxidative stress.

The device is delivering the signals; they are not creating any kind of ROS within the device or delivering any kind of ROS in to the body. Testing was done in a physics lab at a major university to prove that the technology emits only the ROS specific signals. By a process called signal transduction, these signals are delivered to the user to trigger oxidative response. Since the metabolism of oxygen and other factors constantly creates free radicals, strong oxidative response is essential to good health and vitality.

In a Nut Shell

We offer a technology developed to mimic a completely natural process that - doctors and users agree - can help you combat common, debilitating diseases, retard the aging process and live a more powerful, more energized life.  Doctors know that inefficient oxygen utilization leads to a wide variety of diseases and age-related disorders including: Heart Disease, Diabetes, Parkinson's Disease, Fibromyalgia, Chronic Fatigue Syndrome, Asthma, Emphysema, Alzheimer's, Cystic Fibrosis, Macular Degeneration a wide range of Cancers and much, much more. In fact, scientists know that free radical build up is responsible for the very process of aging itself.

Users of this oxygen therapy report: