made in less than 15 minutes!

You can mix up any of your own favorite ingredients. We've chosen to highlight mushrooms, tomatoes, and basil as they are in abundance here in Ontario this time of year. 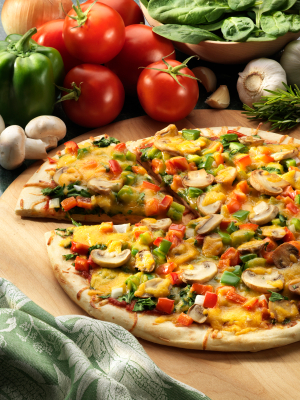 Heat a skillet with a tablespoon of oil over medium heat. Sweat the onion and garlic for about 2 minutes and then add the mushrooms and a pinch of salt. Saute for at least five minutes until mushrooms soften. Add one shake of soya sauce and a teaspoon of lemon juice.  Cook for 2 minutes until flavours are absorbed and put aside.

Lightly brush the remaining olive oil on both sides of the naan bread and salt slightly. Then slightly toast on both sides in a toaster oven (for best results) until a little crispy. This part is key. You don’t want the crust too soft nor too crispy.
Then bring out of the toaster oven and arrange your sliced tomatoes, mushrooms, olives. Drizzle with a little more olive oil and pop back in the over for a few minutes. Plate the pizzas and garnish with the chopped basil or arugula just before serving. The leaves will soften slightly from the steam of the pizza which is what you want.

Naan is a flatbread that is a staple food in India. It is often spiced with garlic and cilantro and can be found in all common grocery stores now. It makes a delicious and perfect crust for a quick and easy pizza snack.