“The ancient Labyrinth represents humankind's search for the core of Divinity”

Welcome to the Magical World of Labyrinths, the Universal Symbol of Transformation. The labyrinth was created in ancient times to represent humankind’s search for the core of divinity. The pattern is an archetypal form found all over the world. It dates back thousands of years. No one knows who created the original labyrinth form, but we do know from experience that embedded within each design is a pattern that guides us to our deepest inner being. Whether walked or traced in sand, the labyrinth pattern is a powerful tool for reflection, invocation, meditation, healing, bringing calm and a deeper knowledge of the Self.

Unlike a maze, a labyrinth has one linear path that starts from the outer edge, moves into the heart or centre, and then back out again. It's a three-part process. Through the act of trusting the path, of giving up conscious control of how things should go and being receptive to our inner state, we can be opened up to a whole new world. It seems that through the beautiful flow of their sacred patterns, labyrinths help us ground ourselves. Some people experience a state of timelessness and find this type of surrender particularly relaxing and refreshing.

Community of Labyrinths Around the World 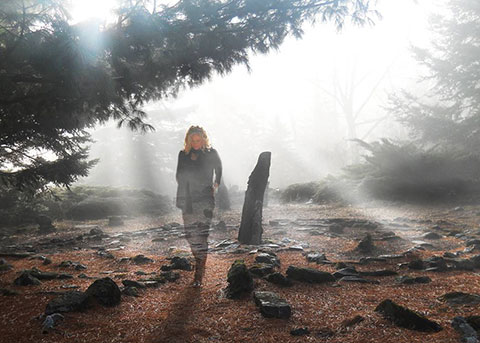 In our present day we are experiencing a rediscovery of the labyrinth as the spiritual tool it was intended for. Many communities are coming together to construct labyrinths in their community parks. Spiritual centres are creating them for those on retreat. Hospitals are building permanent labyrinths for patients and staff. Cancer support groups use them for strength and finding one's way through difficult times.

In medieval times, the labyrinth became the symbol of the spiritual pilgrimage to the Holy City of Jerusalem not exclusive to any one religious order but to all of them whose centre resided there. This focused walk to the centre of the city was used for contemplation of those questions that they needed answers or resolve to. The answers were expected to come once they had reached their temple in the Holy City of God. After several days of rest, recuperation and preparation, they would make their journey back again, a mindful contemplation on how they would now implement their discoveries or realizations into their life, their family, their village, and their people.

"Unlike a maze whose intent is to get us lost,
the labyrinth is designed to get us found." ~ Unknown

Ancient Connections, the Oldest Rock in the World, and Blessings from a Buddhist Monk 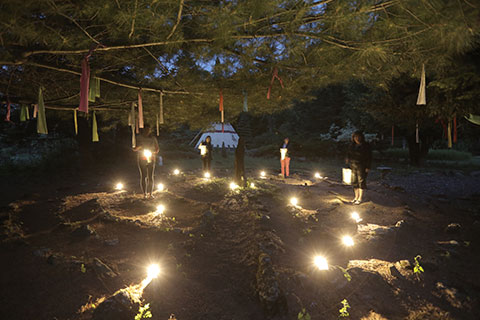 Our sacred labyrinth is designed after the inner five-circuits of the Chartres Cathedral labyrinth in France, built in 1201, one of the most famous labyrinths in the world and the one most replicated. Some interpretations of the circuits surrounding the centre are that they represent the solar system, the centre being the sun, and each circuit a representation of the power or attributes of the surrounding planets. Another is the human body, in particular the chakra system as taught through the different yoga schools.

In March of 2006, we were honored with a visit from Venerable Shenyen, a traveling monk who received his vows directly from the Dalai Lama. In an early morning ceremony while sitting on the snow in the middle of the labyrinth, a few of us were privy to an ancient Buddhist blessing.

A special note of interest

Most of the beautiful ancient rocks you'll see surrounding our labyrinth under the large pine trees were hand dug from the old wagon and foot path of the Heritage Trail. The Heritage Trail was the main trail that was used by both the Algonquin Peoples and the founding settlers of this area hundreds of years ago. They were laid there to honour and remember all those who came before us. And the Heritage Trail just happens to be one of the land boundaries dividing the retreat property. The former owners claimed they found several tool and bone fragments in and around the waterfront area and in 1994, land owners across the lake tore down what was left of the old Spurr Lake Coach House. You can almost envision the beachfront and surrounding area as a perfect encampment where more than likely there had been lots of trading going on at the time.

And, if you explore some of the rocks in the labyrinth you will find plant fossils and quartz crystals everywhere. The Bancroft area is famous for its great variety of minerals such as masses of magnetite, marble and granite, quartz crystal, gold, apatite, beryl, fluorite, talc and sodalite which can be found in displays all over the world, including the Smithsonian Institute. Princess Diana had her entire bathroom in her private residence done in blue sodalite from Bancroft. This region has been subject to many geological processes and has a complex mixture of different rock types that bring rockhounds from all over the world to its annual festival in August. The Highland region lies within the Canadian Shield, a northwesterly trending belt, roughly 400 kilometers wide and 2,000 kilometers long, extending from Lake Huron to the Labrador coast. The rock beneath us is between 1.1 and 1.8 billion years old and has been subject to volcanic activity, glacial scouring, extreme heat and pressure, and intense faulting and folding.